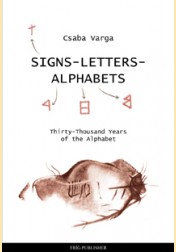 Csaba Varga wrote: “I may get rid of a previously bought merchandise by selling it. However, I won’t lose my knowledge by telling it to other people, and they can’t forget it either. They will pass it on to their friends and children and my information will spread even further. Knowledge is a contagious disease and there is no cure against it.”
We will hear about this book of Csaba Varga certainly during the next decades many times. He proves with his sharp logic in this book that our early ancestors did write text and numbers routinely 30.000 years ago and since they never stopped doing it. He connects all writings systems, alphabets of our culture-history to one proto alphabet, which did not change since those prehistoric times.
Only a man could reach this goal, who can perceive as an artist, have the logic of a mathematician and is free of any political or scientific doctrines.

Varga Csaba: THE SECRET OF THE HUNGARIAN VOCABULARY
4,200Ft 3,780Ft